Colour Theory
1.Colour Wheel is the tool which shows the relationships between colour hues. Colour Wheel basically stems from three ‘primaries’ (3 primary colours), which are aligned at three equally-spaced positions around the colour wheel. Two near primaries produce the second set of hues called ‘secondary colours’, which additionally produce another three colours called ‘tertiary colours’. These hues, being categorised as the six ‘intermediates’, are formulated by the combination of primaries and secondaries.
Understanding the Colour Wheel tremendously facilitates the application of colours. For example, it is wise to know that hues adjacent to each other match well due to their foundation colours, while the opposite hues obviously represent high contrast. Furthermore, the Colour Wheel categorises warm and cool colours. These knowledge therefore undoubtedly elevates efficiencies in colour design for everyone. 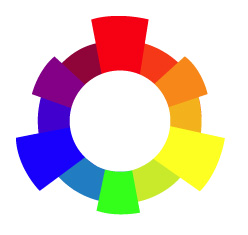 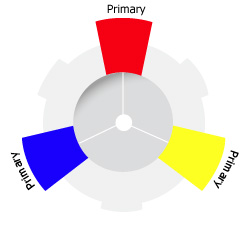 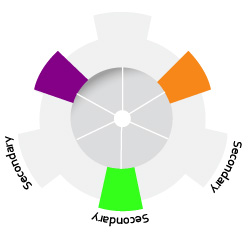 c. Tertiary Colours are formed by mixing one primary colour and one secondary colour. The six tertiary colours include: 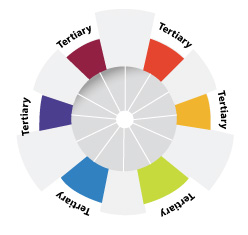 2. Colour Roles
a. Function of Colours Colours generate impacts to us both psychologically and biologically. Factors relevant to impact variation include the property of being a warm or cool colour, the message for which each colour conveys, the light absorption and diffusion of a colour, the coherence of colour and temperature, the perception of colour and space, and etc. Through scientific rationale, smart matching of colour and purpose by basing on understanding in the anatomy of colours hence efficiently optimises the advantages of colours.
b. Colour Symbolism Colours possess communicative properties. Human basically interpret colours in two ways, which are the connections with surrounding environment and psychological sensation, and among these the latter varies according to ethnicity. For example, when looking at a light blue colour, our mind wanders to a clear blue sky, while the feeling of refreshment and comfort may simultaneously be alerted. Colours connecting with the environment, such as green, are mostly universal and timeless. Human of any race perceive green as a representation of nature. This is of no exception with majority of people. However, the psychological interpretation of colour may vary in each society, such as green can be meant for luck, money or greed, for instance
c. Emotional effects Colours affect emotions. The interpretation of colour is typically derived from experiences, as well as some physical impact with such colours. The brain will interpret the wavelength received and respond in a variety of ways. Colours can calm, arouse, irritate or depress us. Colours can charm, enchant, bore, or welcome us. Some colour even threatens or discriminates us. As well, mood of colour will vary in relation to various elements. Should the degree of hue, value or chroma changes, so does the mood of colour shift.
d. Physiological effects Colours not only generate psychological, but also physiological impact. A scientific research has found that merely a brief time of looking at red could arouse the brain to release more adrenaline. Heart rate will be faster, with the increases in blood pressure and breathing, while the taste bud and Olfactory nerves become more sensitive, resulting in higher appetite. On the contrary, blue slows down the heart rate, reduces body temperature, enhances deeper breaths and suppresses the appetite.